Back at the Ponds- Growout Ponds for Native Species Conservation 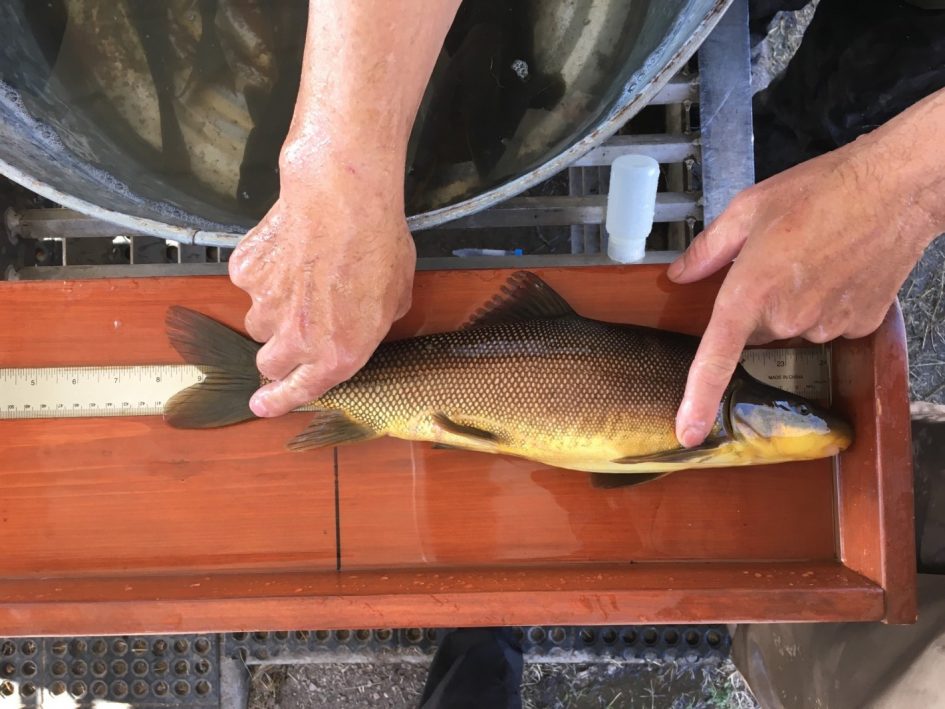 This razorback sucker was 405 mm (15.95 inches) in length. The black line on the measuring board delineates 300 mm (11.8 inches), which is the minimum size to be stocked. All fish to be stocked are measured and PIT tagged, and that data is recorded.

Pond harvest season is under way at Bubbling Ponds Hatchery (BPH) by Arizona Game and Fish staff. Currently staff is rearing three year classes of Razorback Sucker as part of the Lower Colorado River Multi-Species Conservation Program.  Razorback Suckers are harvested as juvenile fish from Lake Mohave in winter months December-March; some of the small suckers are then transferred from Willow Beach Fish Hatchery to large outdoor grow-out ponds at BPH where they can quickly grow. Fish are captured from these ponds and sorted by size several time a year, when fish reach over 305 mm they are considered large enough to face the predators in the Colorado River. This year in October, about 3,100 razorback suckers, all over 305 mm long, were harvested, PIT tagged, then stocked into multiple backwater sites along the Colorado River.  On November 15, about the same number of razorback sucker will be harvested from another pond, and the process repeated.

Also kept in grow-out ponds at BPH is a brood-stock of Roundtail Chub from Verde River. These fish were collected and naturally reproduce in the pond every year. This year thousands of young can be seen swimming throughout the pond indicating a good production this year! Roundtail chub young will be harvested in December and stocked into locations on the Verde River and Oak Creek; up to 3000 will be tagged and tracked as part of a predator study being conducted by USGS, in the Verde River.  In addition Colorado Pikeminnow are also be grown at BPH this year for stocking into the Verde River this coming spring!

The purpose of BPH’s grow-out ponds is to provide a more natural setting than the traditional concrete tanks seen at many hatcheries. They also require less feed and man hours to raise fish than in traditional hatchery settings. Thus they provide an excellent place for our large-bodied native fish to reach greater bodied size before stocking. This body size allows for dramatic increases in survival rates when native fish are stocked into locations where non-native species are present such as the lower Colorado and Verde Rivers.