Pond habitat at the International Wildlife Museum in Tucson, AZ. 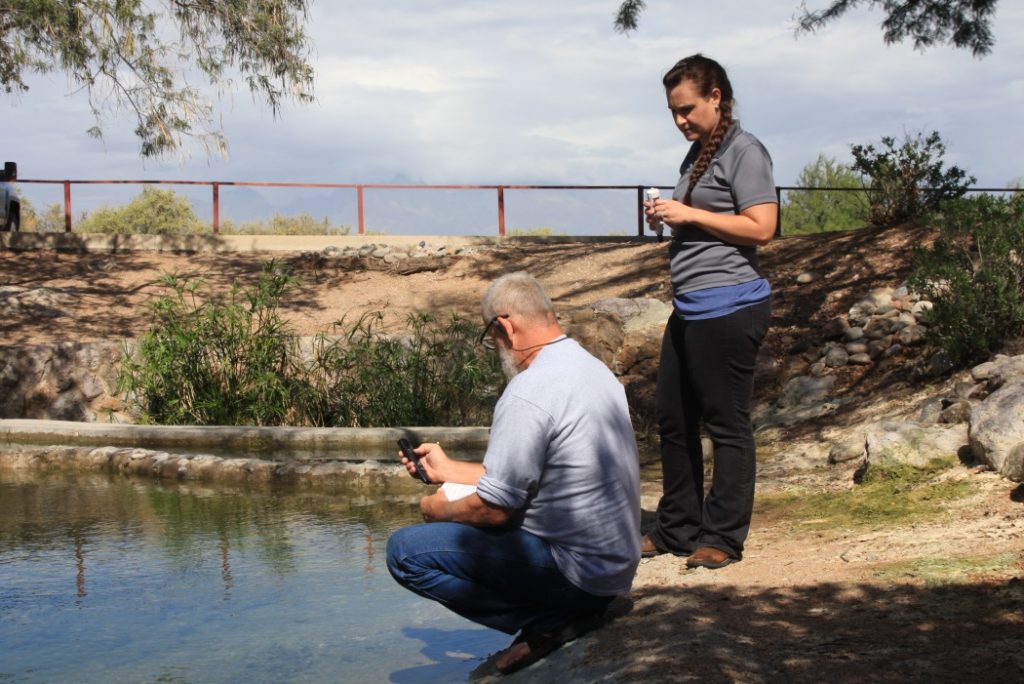 Recording water quality prior to acclimating fish for the reintroduction.

On September 23, 2016, Arizona Game and Fish Department and International Wildlife Museum personnel returned approximately 365 Desert pupfish to the Museum’s native fish refuge pond in Tucson, AZ.  In a cooperative effort with the Arizona Game and Fish Department and U.S. Fish and Wildlife Service, the International Wildlife Museum has maintained refuge populations of endangered fishes since the late 1990’s. The Desert Pupfish stocked were fish originally salvaged from the Museum (and their offspring) during an emergency salvage action in November of 2015. Desert Pupfish were removed following the discovery of nonnative Mosquitofish in the refuge pond. The origin of the Mosquitofish was never determined; however, it could have been do to illegal introduction by the public as Goldfish were also found at the site. Mosquitofish are believed to be the cause of the decline and disappearance of Gila Topminnow, which had shared the habitat with the Desert Pupfish and Chub. Following their salvage, pupfish were transported and held on-station at the Department’s Aquatic Research and Conservation Center at Cornville, AZ.

Pupfish were released into the pond following acclimation to the pond water.

After the pupfish were salvaged, the pond was drained and dried completely to eliminate the Mosquitofish; maintenance and repairs to the pond were then completed by the Museum. The pond was refilled and allowed a few months to stabilize before the pupfish were reintroduced. Museum staff that participated in the stocking includes Museum Director Dan Brooks, Katie Robinson and Amy Soneira. Future plans are to augment the population with additional pupfish in 2017, and return Gila Topminnow and Chub to the pond soon after. There are also plans to stock several Razorback Suckers into the habitat, which will provide additional educational and viewing opportunities for the public, and introduce them to one of Arizona’s larger native fishes.