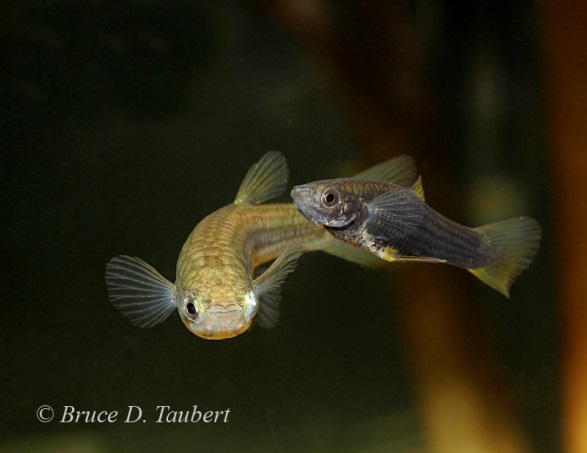 Appearance: Females typically up to 1.5 inches long; on their sides and back they are tan in color, with the color of their bellies being cream or white. Females often have diffuse, small, pepper-like spots along the side of their bellies. When not in breeding color, male topminnow are similar in color to females, typically reaching no more than 1 inch in length. When in full breeding color however, males are easily recognizable due to their overall black body coloration with yellow fins. During the breeding season, verification of the presence of Gila topminnow is often simplified due to the males coloration, which easily distinguishes it from all other species.

Habitat and Range: Once considered the most abundant and widespread species in the Gila River Basin, Gila topminnow historically occupied still or slow moving waters of rivers, backwaters, cienegas, springs and streams below 5,000 ft. elevation. Currently, they occupy a very small percentage of their former range. In habitats where they occur today, they are found in depths from several centimeters to several meters. In deeper waters, they often are associated with suspended aquatic vegetation away from the banks, or with rooted plant materials and algal mats along stream and pond margins. In shallow streams, adults can be found in slow runs, quiet pools, and moderate, shallow riffles, often adjacent to emergent vegetation or algal mats, into which they will dash when startled or surprised. 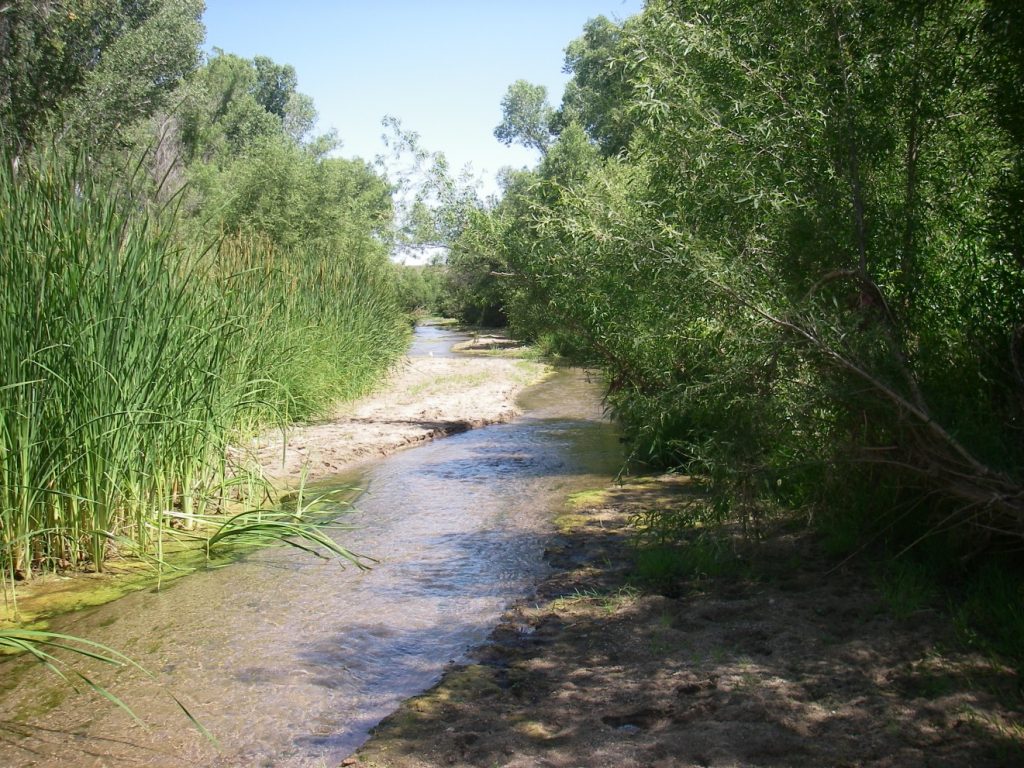 A section of River that Gila Topminnow were captured in during recent surveys.

Breeding: Gila topminnow are one of two “livebearers” native to Arizona waters. Fertilization is internal (rather than “spawning” like other fishes, the male topminnow inseminates the female) and several fertilized broods can be carried in a state of suspended development or at different stages of development by the female, while another single brood matures and is born. As previously noted, the bodies of males in the peak of breeding condition display a jet-black body coloration, with yellow dorsal, caudal and anal fins. Courtship behavior observed in the field often finds a single female pursued by one or multiple males. Minckley (1972) reports brood sizes from 1 – 15, however later publications report broods typically range from 5 to 20 young (Minckley and Marsh, 2009). In certain natural spring systems with warm inflow, the species can maintains some level of reproduction throughout the year (Constantz, 1979).

Status: Federally Listed as Endangered in 1967; no Critical Habitat has been designated for the species.

Threats: Major threats to the continued existence of the Gila Topminnow include illegal stockings of competitive and predatory invasive species, especially Mosquitofish and Green Sunfish, and loss of habitat due to dewatering or drying. Though to a lesser degree than in years past, mosquitofish and other nonnatives continue to be illegally transported and stocked into waters around southern Arizona, occasionally showing up in repatriated populations and refuge ponds. Such actions have disastrous effects on topminnow populations, and require the expenditure of great effort and resources to renovate and reclaim them.

Actions: Through continuing efforts by Arizona Game and Fish Department and their partners, the number of captive and wild populations of Gila topminnow in the Gila River Basin has increased dramatically during the last decade. Efforts to remove non-native species from suitable habitats and replace them with topminnow are ongoing in wild and captive sites in the Gila River Basin. A Safe Harbor Agreement for topminnow and pupfish between the U.S. Fish and Wildlife Service and Arizona Game and Fish Department in 2008 has resulted in the establishment of a number of large topminnow populations in non-Federal waters that would otherwise not be available for topminnow conservation. The Department is pursuing the feasibility to use topminnow for vector control.