In March of 2008, a Safe Harbor Agreement for Topminnow and Pupfish (SHA) between the Department and the U.S. Fish and Wildlife Service was finalized and signed into effect, providing a tool that allows non-Federal landowners to participate in recovery efforts for topminnow and pupfish, while receiving protection against future “Take” of these Federally-listed species.

If they have suitable habitat, non-federal landowners can enroll their property under the protection of the SHA, should they wish to take part in the conservation of these two native fishes. Prior to its enrollment, a baseline number for topminnow and pupfish on the property is established and whether the enrollment of the property will result in the net conservation benefit to the species. In effect, this identifies the size of the topminnow or pupfish population on the property at the time of its enrollment, which is usually zero. After enrollment, a landowner may then incidentally take the species covered by the SHA, as long as the baseline is not exceeded. A property is enrolled through the completion of a Certificate of Inclusion after its assessment and the determination of a baseline number.

Prior to enrollment and stocking, the Department is responsible for conducting an assessment of a site to ensure no biological threats (such as predatory or competitive nonnative species) exist at the site, and that habitat quality is suitable to support one or both species. Based on the practical management aspects of populations established under the SHA, enrollment of properties is focused primarily on larger bodies of water with the potential for producing and maintaining thousands of the native fishes. The Department is also responsible for the monitoring and management of the species following their establishment.

Populations of sufficient size and numbers established under the SHA not only assist in the conservation and recovery of the species, but count towards their recovery under the Endangered Species Act. Currently, there are 18 properties enrolled under the SHA throughout the Gila River basin in Arizona, with a total of 23 ponds supporting one or both species. A number of other properties are in various stages of construction, soon to be enrolled. These SHA populations serve as a safeguard against the disappearance of populations that remain in the wild, or as a source to reestablish populations that have already disappeared due to degraded or dwindling habitats and nonnative species. They will also provide a source for the establishment of additional captive and wild populations in the future. 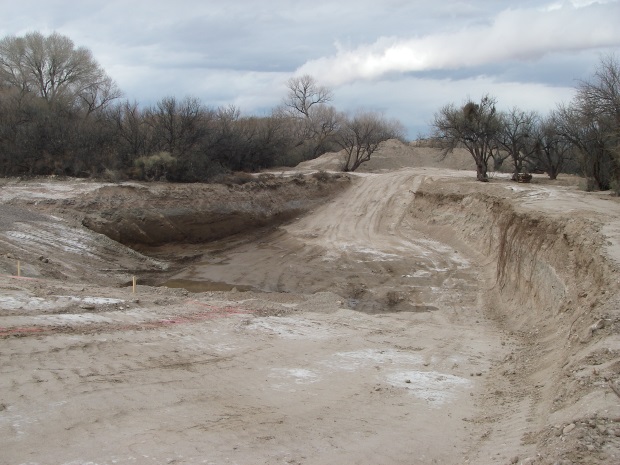 Construction of SHA-enrolled Sundt Pond in 2009. Today it supports both topminnow and pupfish.