Featured Story – How Do We Monitor Apache Trout Recovery Streams? 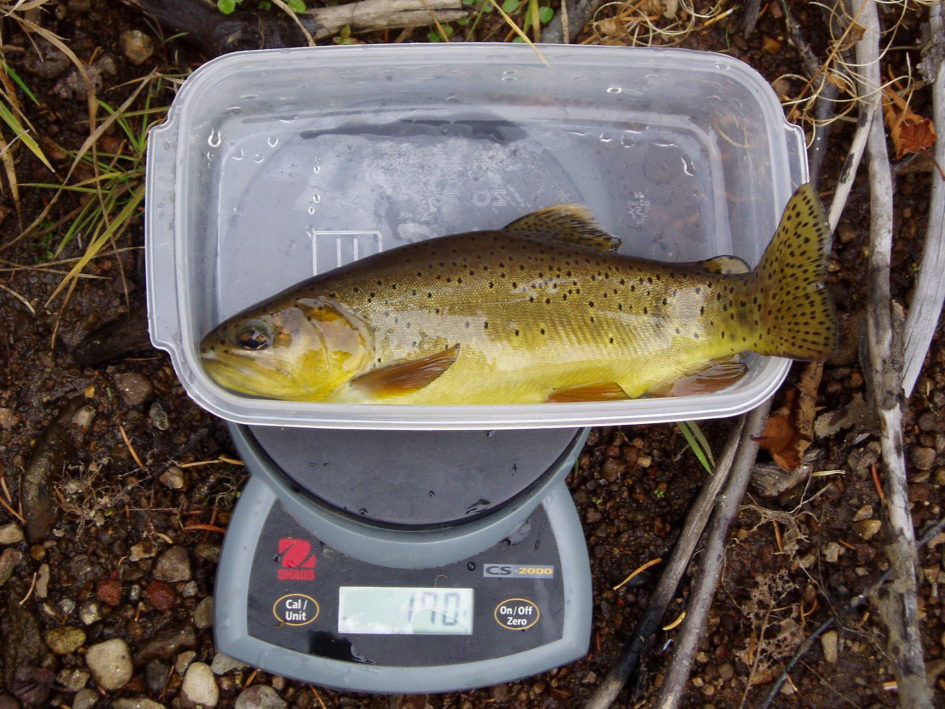 Weighing a portion of Apache Trout captured is part of the monitoring protocol.

The Apache Trout (Oncorhynchus apache) is native to streams in the Black, White, and Little Colorado rivers in Arizona and is currently listed as threatened under the Endangered Species Act.  Populations have fluctuated over time, with declines caused by many factors including nonnative salmonid introductions, wildfire and post-fire impacts, and habitat degradation.   The Apache Trout Recovery Plan (2009) has a goal of implementing actions to delist Apache Trout, specifically by establishing or maintaining 30 self-sustaining and discrete populations of genetically pure Apache Trout within the species’ historical range. 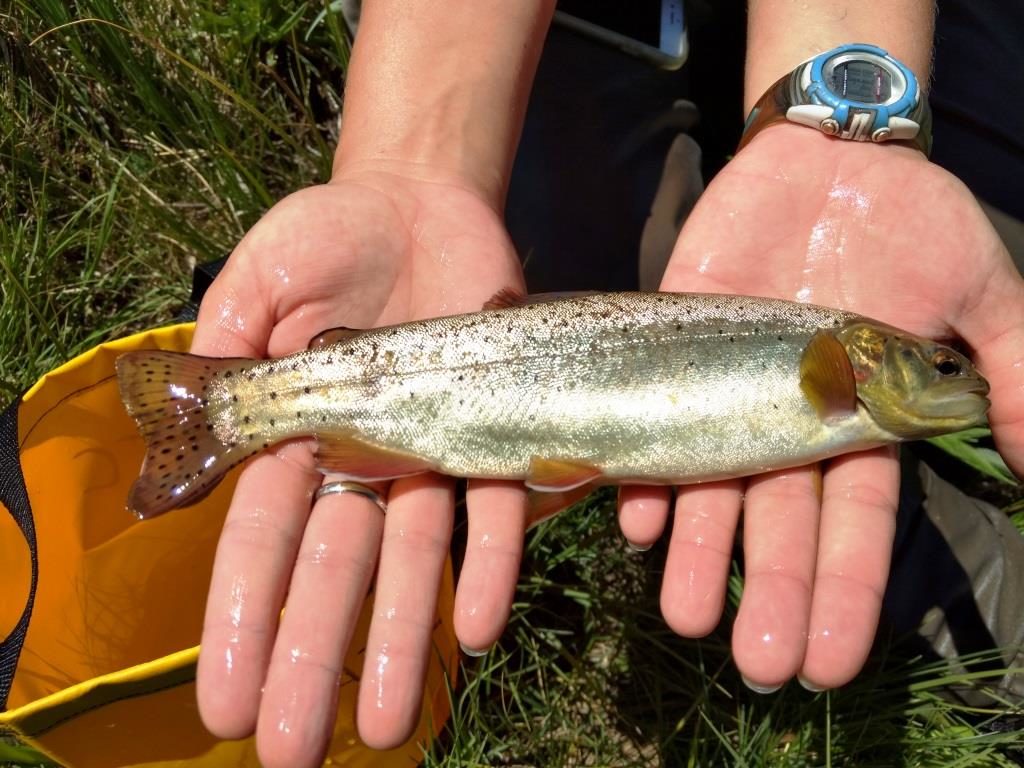 An Apache Trout captured during a survey.

As we continue to restore and maintain Apache Trout populations and work towards the goal of delisting, there is a need to monitor populations to obtain estimates of abundance, distribution, and recruitment. Developing a monitoring protocol would enable the Arizona Game and Fish Department, Fort Apache Indian Reservation, and U.S. Fish and Wildlife Service to evaluate the status of populations consistently.

Through funding from multiple sources, including the National Fish and Wildlife Foundation, Arizona Game and Fish Department, U.S. Fish and Wildlife Service, and Trout Unlimited’s Coldwater Conservation Fund, a team led by Dan Dauwalter, Fisheries Science Director with Trout Unlimited, has been developing the Apache Trout Monitoring Plan. The goals of the plan are based on accurately and precisely estimating the status of Apache Trout populations on a 5-year interval. 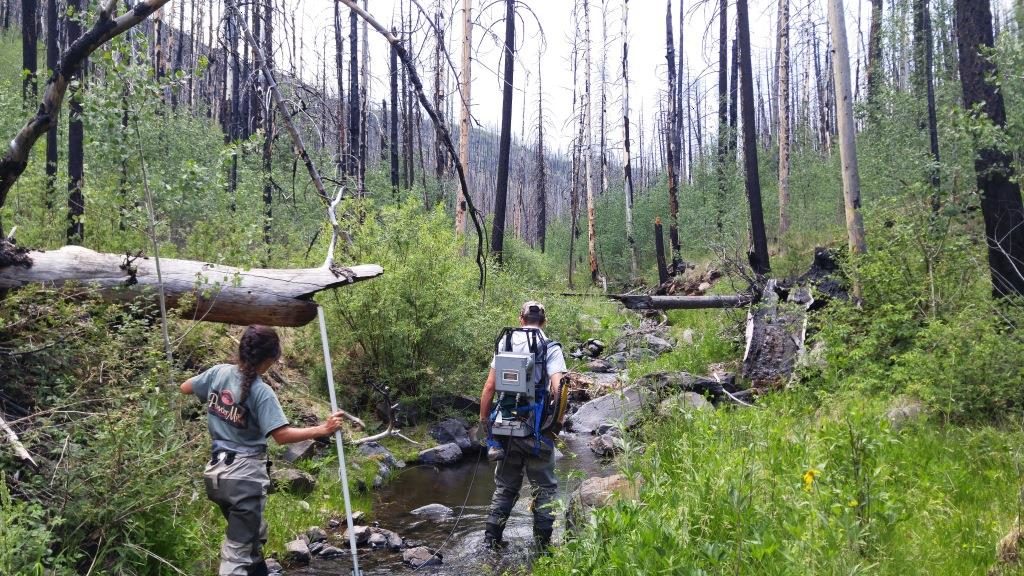 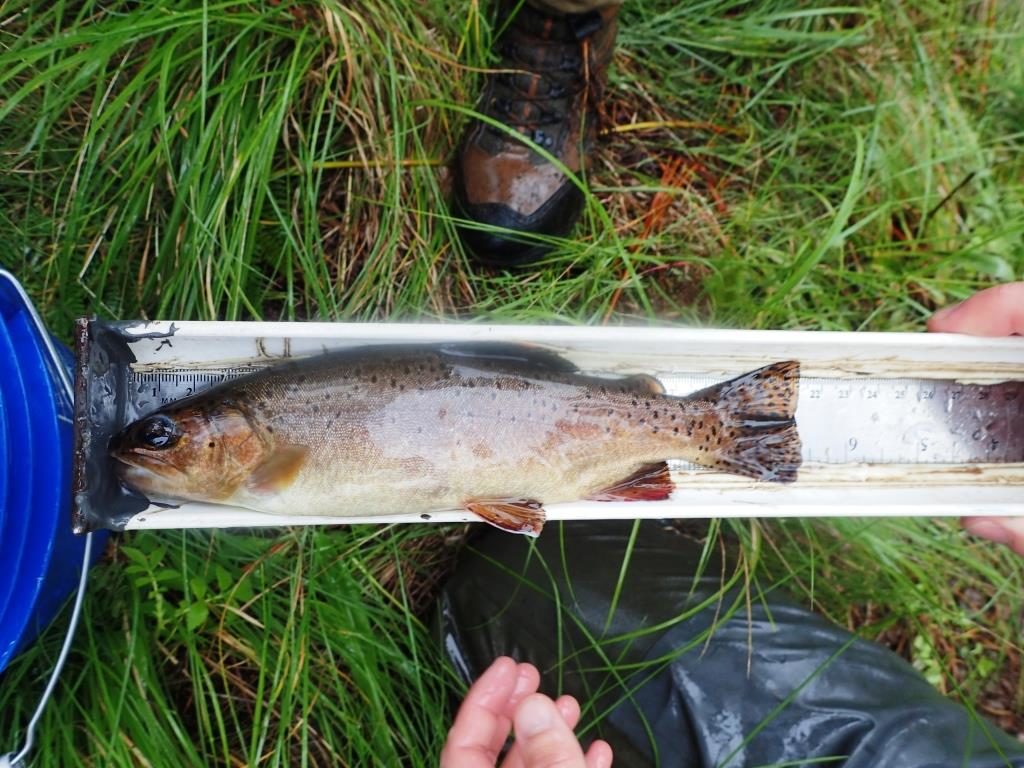 Apache Trout are measured for length.

Department biologists selected three streams to survey and evaluate the monitoring protocol in 2017. Sampling was completed on the South Fork Little Colorado River, Mineral Creek, and Soldier Springs.  Using the proposed protocol, sampling was conducted on 20% of each stream occupied by Apache Trout.  Three-pass depletion population estimates of 100-meter sites were conducted using backpack electrofishing units.  The smaller streams only required sampling three or four sites, while the larger stream required sampling 18 sites.  Data from the 2017 sampling efforts is being analyzed using the monitoring plan.

The plan is undergoing a final review currently and will be finalized in December 2017.  The monitoring plan will allow managers to determine the status of Apache Trout populations and have current data available to inform future planning and management decisions.