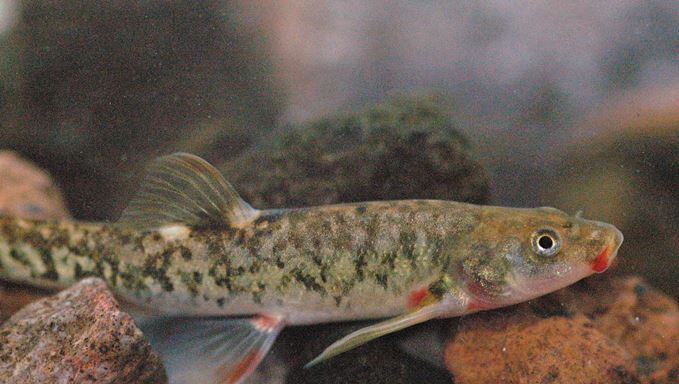 Appearance: The Loach Minnow is a small stream dwelling minnow, with a maximum length of about 2.75 inches. The body is elongated, and a little compressed and flattened vertically, particularly towards the head. Mouth is small, terminal, and highly oblique with no barbels present. Upper lip is non-protractile and attached to the snout by a broad fold of tissue (Minckley 1973). 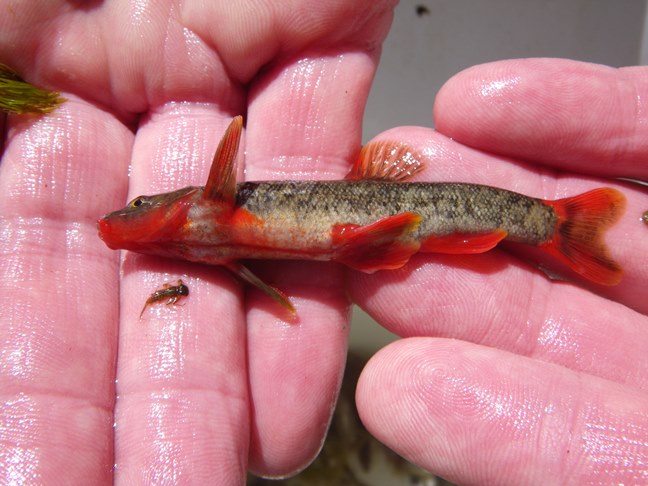 Habitat and Range: The cryptic, solitary, and sedentary loach minnow occupies turbulent, rocky riffles of rivers and smaller streams. They prefer moderate to swift current velocity and gravel or cobble substrates. They are sometimes associated with dense, filamentous green algae. Loach Minnow is restricted almost exclusively to a bottom dwelling habitat because of a reduced gas bladder.

Endemic to Gila River Basin. Historically were distributed near and upstream of Phoenix, in the Gila, Agua Fria, Salt, San Pedro, and Verde River systems in Arizona. They were also found in New Mexico, and Sonora, Mexico. Occupied streams ranged in elevation from about 2,300 – 8,200 ft.  Today they are limited to about eight natural populations in Arizona and New Mexico.

Breeding: Spawning occurs late winter to the beginning of summer, depending on elevation of the stream. First spawn occurs in their second year. They spawn in the same riffles that they occupy during the non-reproductive season.  They find or dig nest cavities on the underside of flattened rocks, with the nest entrance facing downstream.  The female lays adhesive eggs on the underside of the rock.  The male, and possibly the female, guards the nest cavity.  The number of eggs per rock ranges from 5 to more than 250, but typically is 52 to 63 (Marsh 1991). Eggs hatch in five to six days.

Status: Federally listed as Endangered with critical habitat in 2012.

Actions: The Arizona Game and Fish Department, New Mexico Department of Game and Fish, U.S. Fish and Wildlife Service, U.S. Bureau of Reclamation, U.S. Forest Service, U.S. Bureau of Land Management, universities and private organizations have been working together as part of the Loach Minnow Recovery Team and Loach Minnow Conservation Team to protect and restore Loach Minnow throughout their historic range. Actions have included barrier construction to prevent upstream migration of nonnative fish into Loach Minnow occupied reaches, the reintroduction of Loach Minnow to streams in the species range, and removing nonnative fish species.  A few new populations have been established but finding new locations for reintroductions is challenging because of drying climate and widespread non-native fishes.