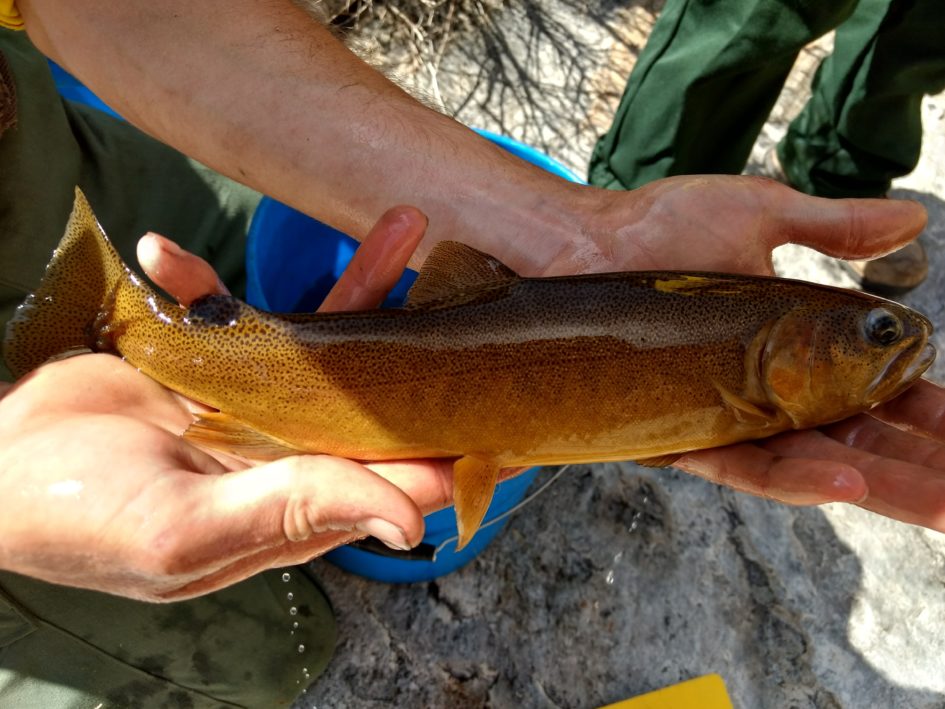 A beautiful Gila Trout, native to Arizona and New Mexico.

Appearance:  Gila Trout have iridescent gold sides that blend to a dark copper on the gill plates.  They have small, profuse spots on their body typically occurring above the lateral line from the head to the caudal fin and extending onto the dorsal fin.  Parr marks are commonly retained by adults, although they fade with age.  A faint, pink band may be present on adults, particularly during spawning season when the normally white belly may be streaked with yellow or reddish orange.  The dorsal, anal, and pelvic fins have a white to yellowish tip that may continue along the leading edge of the pelvic fins.  Adults are typically 7 to 12 inches but can reach 18 inches.

Diet:  Gila Trout feed primarily on aquatic and terrestrial invertebrates.  They are opportunistic feeders and will also prey on fish.

Habitat and Range:  Gila Trout require cold water, typically with temperatures below 77-degrees F.  They are found in perennial mountain streams above 5,400 feet elevation with moderate to high gradient.  Gila Trout require streams with flow adequate to maintain water depth and cool temperatures.  They need sufficient pools and habitat that provides refuge during periods of low flow or warm temperatures.  Invertebrate prey, cover such as undercut banks and woody debris, and clean water are essential for Gila Trout.

Gila Trout are native to the San Francisco, Verde, Gila, and Aqua Fria River drainages in New Mexico and Arizona. In Arizona, Gila Trout have been restored to several streams; however recent fires have impacted three of those populations.

Breeding:  Gila Trout spawn in the spring, typically as spring runoff declines and water temperatures being to rise.  They require clean gravel substrates for redd construction.  Gila Trout generally mature at age 3.  A female typically produces 140 to 335 eggs.  The eggs hatch in about 8 weeks or less in warmer water temperatures. 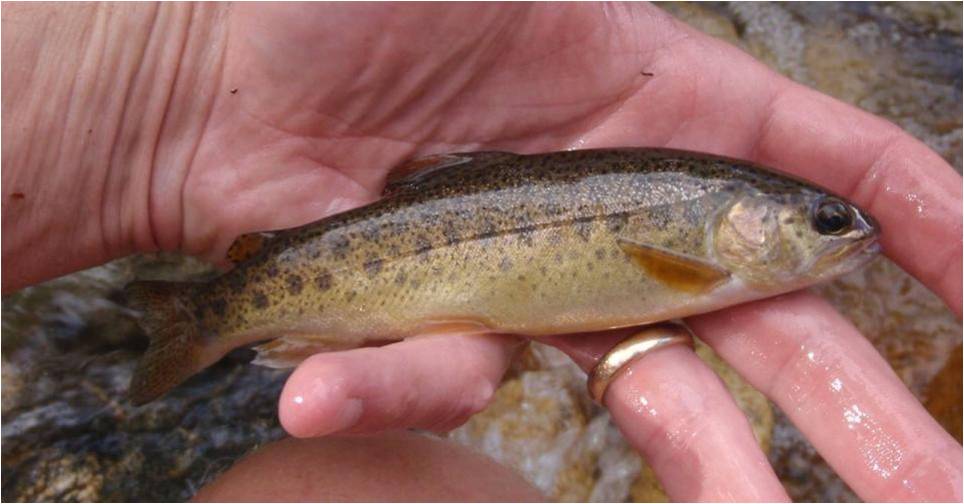 Status:  Gila Trout were listed as federally endangered in 1967 under the Endangered Species Act and reclassified as threatened in 2006.  They were considered extirpated from Arizona in 1990.  Recovery efforts have reestablished Gila Trout in streams in Arizona and New Mexico. The U.S. Fish and Wildlife Service’s Mora National Fish Hatchery in New Mexico propagates the different lineages of Gila Trout to aid in the restoration of new populations throughout their historical range.

Threats:  One threat to Gila Trout is the presence of nonnative trout in their historic range.  Gila Trout can hybridize with nonnative Rainbow Trout (O. mykiss) which has greatly reduced the rage of pure populations of Gila Trout.  Hybridization causes a loss of the unique genetics of Gila Trout, which represent local adaptation to the environment they inhabit.  Other nonnative trout, including Brook Trout (Salvelinus fontinalis) and Brown Trout (Salmo trutta), compete with Gila Trout for available habitat and food resources where they overlap.

Land management practices have also impacted Gila Trout. Poorly managed livestock grazing near streams has caused erosion and sedimentation, resulting in lost habitat and declines in Gila Trout populations.  Over the last decade, large scale wildfires have occurred on a more regular frequency than historically observed.  These fires have eliminated several populations of Gila Trout due to post-fire floods and altered hydrology in the systems. 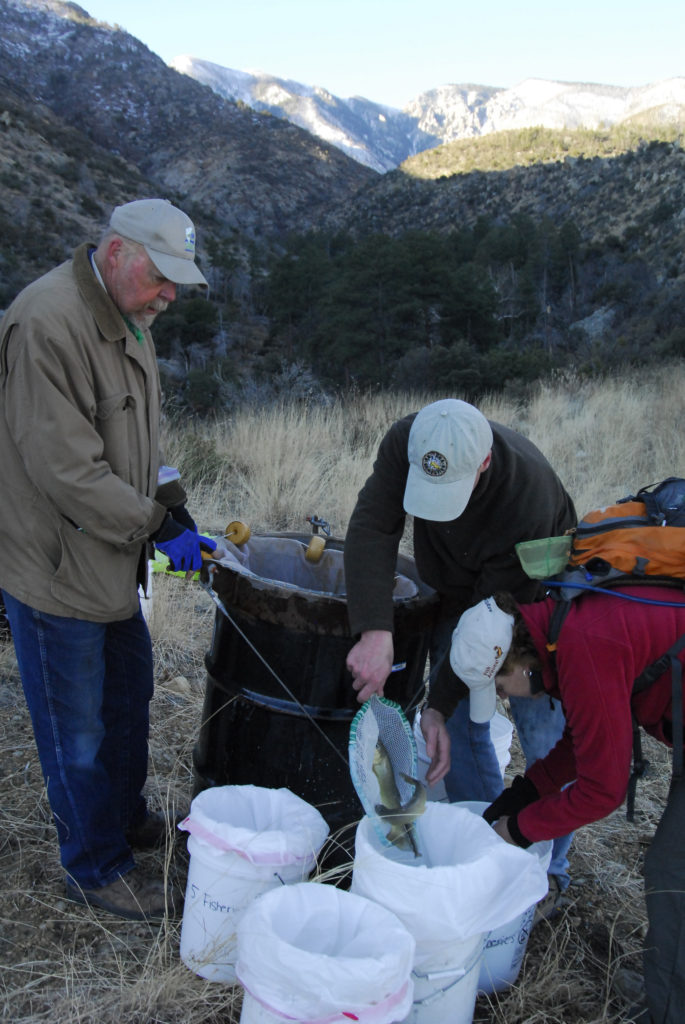 Gila Trout from the Mora National Fish Hatchery were transported by helicopter to the banks of Frye Creek, where they were then released.

Angling Opportunities:  The down-listing of Gila Trout to threatened in 2006 included a special provision under the Endangered Species Act – the 4(d) rule – allowing management of the species as a sportfish in select areas.  Several waters including Frye Mesa Reservoir, Goldwater Lake, and West Fork Oak Creek are open to angling for stocked Gila Trout in Arizona.  Angling opportunities for Gila Trout in New Mexico are also available. As more Gila Trout recovery streams are established and meet necessary population criteria to withstand limited angling use, they may be opened to angling in the future. 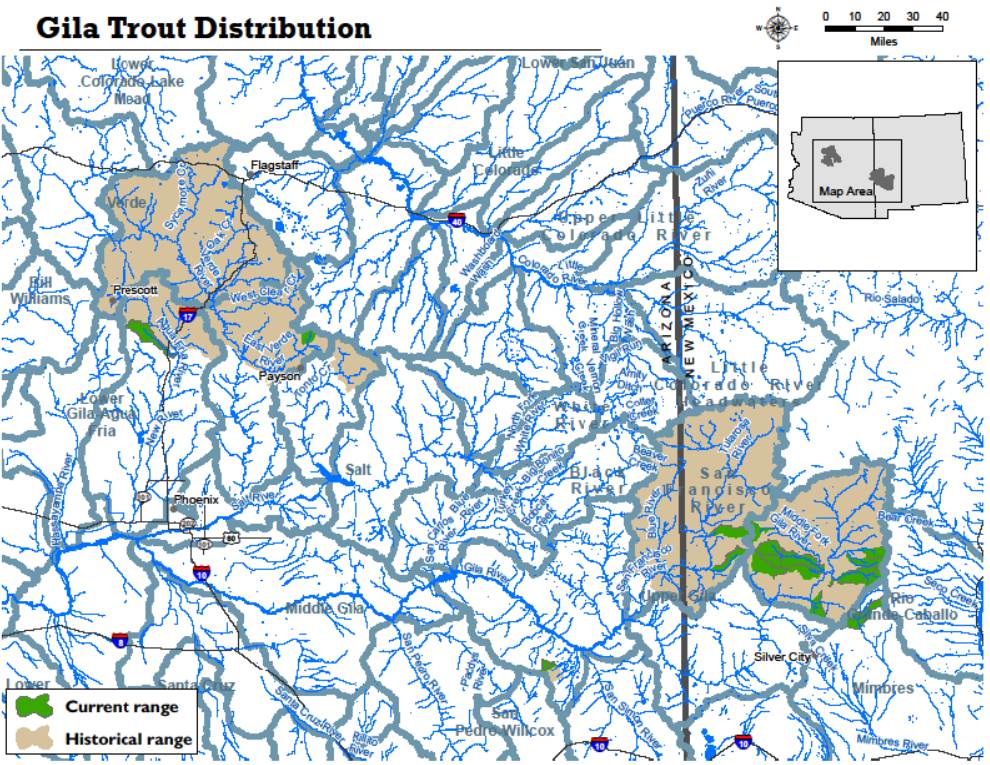 A map of the distribution of Gila Trout in Arizona and New Mexico (map source: Trout Unlimited).