On May 2nd- 4th, 2017, Department staff surveyed 15 stock tanks in Coconino National Forest, southwest of Stoneman Lake. These tanks are located above the Rarick Canyon drainage. There are several perineal pools within Rarick Canyon which contain native chub and suckers as well as nonnative Green Sunfish, Black Bullhead and Fathead Minnows. The goal of the tank surveys is to determine which tanks contain nonnative fish species which could potentially spill into Rarick Canyon during heavy rain or snow melt. The tanks are believed to be the source of nonnative fish now found in Rarick Canyon. Of the 15 tanks surveyed, only one tank contained green sunfish and black bullheads. The remainder of the tanks contained only aquatic insects or a combination of aquatic insects, Tiger Salamanders (juveniles and adults), Northern Leopard Frogs (tadpoles and adults), Northern Crayfish and one Terrestrial Garter Snake. There are 24 tanks in the area yet to be surveyed which will take place in the coming weeks! 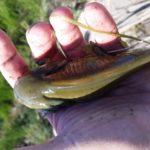