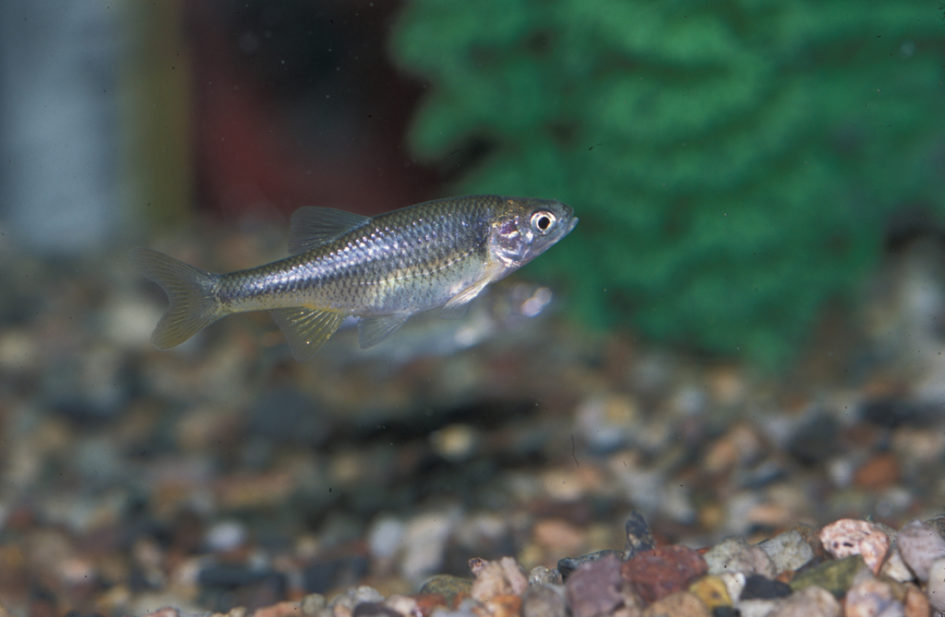 Appearance: Length up to 3.5 in. Body compressed, its depth about same as length of head. Snout relatively pointed. Mouth oblique. Lateral line slightly decurved. Nonbreeding coloration similar to that of the nonnative Red Shiner (Cyprinella lutrensis), but Beautiful Shiners are more orange or yellow, body is bluish metallic, top of head red to orange and red-orange caudal peduncle during breeding season. Males have tubercles of various sizes on the head, paired fins, and caudal peduncle.

Distribution of Beautiful Shiner in Arizona and New Mexico (map courtesy of NatureServe).

Habitat and Range: Historical range included the Rios Yaqui, Casas Grandes, Santa Maria, and Santa Clara drainages in Sonora and Chihuahua, Mexico, the Rio Yaqui (San Bernardino Creek) in Arizona, and the Mimbres River, New Mexico. Currently in Arizona, Beautiful Shiner are only found in a few ponds within San Bernardino National Wildlife Refuge. Beautiful Shiner are found in pools and runs along the shorelines in large streams, and tending more to move into riffles in smaller streams with gravel, rock or sandy bottoms.

Breeding: Reproduction habits are not well documented. Spawning actions presumably consist of spreading the eggs over aquatic vegetation, brush, other cover or simply over the bottom. Reproduction likely takes place from May through July.

Status: Federally listed as Threatened in 1984.

Actions: The Beautiful Shiner was extirpated from the United States in 1969-1970. More than 700 fish were caught in Mexico and transported to U.S. Fish and Wildlife Service Dexter National Fish Hatchery in New Mexico to establish a captive breeding program. A population was re-introduced into U.S. Fish and Wildlife Service San Bernardino National Wildlife Refuge in Southeastern Arizona in May of 1990. The Arizona Sonoran Desert Museum is currently trying to breed Beautiful Shiner at their facility in Tucson. If propagation efforts are successful, shiners may be placed in a new location on the refuge, and potentially into upstream habitat in the Leslie Canyon drainage.

Beautiful Shiner, a threatened species under the Endangered Species Act.

Native Species of the Month, Uncategorized