Native Species of the Month – Machete

The Machete, which occasionally occurs in the lower Colorado River in Arizona.

Habitat and Range: Eastern Pacific from Peru to California, including the Colorado River delta in the Gulf of California (Sea of Cortez); in Arizona, occurs sporadically in the lower Colorado River, possibly following flood events that connect the river to the Gulf. Upstream movement in the Colorado River is limited by dewatering in Mexico and dams in Mexico and Arizona.  Machetes were reported in the Salton Sea in California and up river to Imperial Dam until the mid-1940s.  The last known record of Machete in Arizona was in 1997; several were caught near Yuma when the Gila River flood flows reached the sea. Little is known about the habitat requirements of the species.  Primarily a marine fish found in open seas, coastal waters, bays, tidal streams, lagoons, estuaries and lower reaches of freshwater rivers.

Breeding: Machete broadcast spawn in the open sea. Off-shore spawning sites are unknown but leptocephalus larvae move inshore to develop and grow in brackish water and are common in tidal flats of the Sea of Cortez in early summer. Near transparent leptocephalus larvae, look similar to eels but can be distinguished by a forked tail.

Status: None at this time.

Actions: None at this time.

Better Know a Fish! Species Profile can be found at: https://betterknowafish.com/2013/10/27/machete-elops-affinis/ 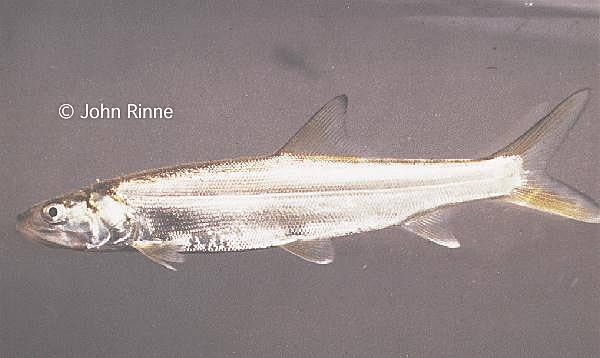 Machete, also known as the Pacific Tenpounder or Ladyfish.