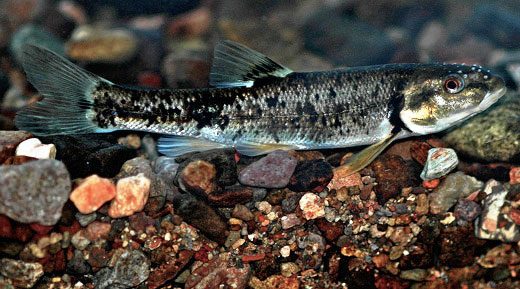 Appearance: Length of the adult Mexican Stoneroller rarely exceeds 5 inches, however large adults may reach a Total Length of nearly 6 inches or more (Rinne and Minckley, 1991). Coloration of the Mexican Stoneroller is extremely variable, in both juvenile and adult fish. Adults are typically dark-colored dorsally, lighter below, often with variable dark patches or blotching on the dorsal and lateral surfaces; also, a dark lateral band is variously developed. Juveniles are usually much lighter than adults, but when dark markings are present, they are less developed than in adults and restricted to the dorsal surfaces above the lateral line. In addition to being lighter, juveniles often have a distinct black lateral stripe, with a pale caudal spot. Fins are usually transparent in both sexes prior to the breeding season, but dark bands may begin to appear in the males on the dorsal and to a variable degree the other paired fins, several months prior to and throughout the breeding season.

The mouth of the Mexican Stonerollers is sub-terminal, with a slightly overhanging snout projecting beyond the mouth. There is a cartilaginous ridge lining both upper and lower jaws, with the lower lip showing an easily discerned, distinct ridge not covered by skin (Burr, 1976).

Diet: They use the cartilaginous ridges on their jaws to feed, scraping algae and diatoms from stones and other solid substrates. Stonerollers also feed on detritus and small aquatic invertebrates.

Habitat and Range: One of the lesser-known native fishes of Arizona, the Mexican Stoneroller can typically be found in small to moderately-sized tributary streams with cool, clear waters. They use a variety of instream habitats, and can be found occupying pools, runs or riffles, over a variety of substrates from coarse sands and gravels to cobbles, boulders and fractured bedrock. Larger individuals can often be found in deeper flowing pools, along undercut banks or adjacent to other cover.

Mexican Stoneroller has its total range contained largely in the Atlantic and Pacific drainages of northern Mexico. It only makes its way into the continental United States in the Rio Yaqui drainage of southeastern Arizona, and in the Rio Bravo of west Texas. The Stoneroller is found in headwater streams of the Rio Conchos and some endorheic basins in Chihuahua, south to the State of Zacatecas. On the Pacific side of northern Mexico, it is found in the rios Yaqui, Sonora and Mayo of Sonora, southward into the Rio Piaxtla of Sinaloa (Miller et al., 2005). The Mexican Stoneroller can still be found in some of the waters of southeastern Arizona and recently still occupied the waters of the Cajon Bonita in Sonora, Mexico, a short distance east of the San Bernadino National Wildlife Refuge near Douglas, Arizona.

Range of the Mexican Stoneroller in southern Arizona.

Breeding: During the breeding season, enhanced colors develop in the male, along with a humped back and strong, enlarged tubercles on the snout and head (Rinne and Minckley, 1991). Burr (1976), states that gravid females also develop breeding tubercles, though not to the degree of the breeding males. Rinne and Minckley (1991) describe breeding tubercles in the male Stonerollers being used to combat other males, to excavate the nest, and to stimulate and guide females to the nest prior to spawning. In their publication they provide the following description: “The term ‘stoneroller’ comes from the movement of gravel by a male during nest excavation. Stones are pushed about with the head and carried in the mouth, which results in an elongate depression on riffles that is actively defended against other males.” Females enter the depression to spawn. When the non-adhesive eggs are deposited by the female, they are fertilized by the male and lodge in the crevices of the gravels, where the male actively defends them until they hatch.

Based on the findings of Hendrickson et al. (1980), breeding in Arizona and locations along the Rio Yaqui in Sonora apparently occurs over an extended period, since specimens in breeding condition and tiny young were collected throughout the Spring and Summer during their surveys.

Status: Currently, it has no federally protected status in the United States. In Mexico, it was listed by SEDESOL in 1994 as endangered (Miller et al. 2005). In Arizona, due to its very limited distribution, declining habitat and threats from nonnative species, it was listed as endangered and a “Species of Special Concern” (AZGFD, 1996).

Threats: Stonerollers in Arizona are limited to just one or two streams in the uppermost portions of the Rio Yaqui in southeastern Arizona. In the U.S., the species is not considered threatened or endangered and no critical habitat is designated, thus the species has not been given any protected status. In Mexico, individual populations are known to have declined, but range-wide, the species seems to be maintaining itself.

Actions: Conservation efforts in Arizona are currently focused on developing a refuge population(s) in southern Arizona.

Mexican Stoneroller (photograph courtesy of Creative Commons, no changes have been made http://arizonadesertfish.myspecies.info/nontaxonomy/term/55)